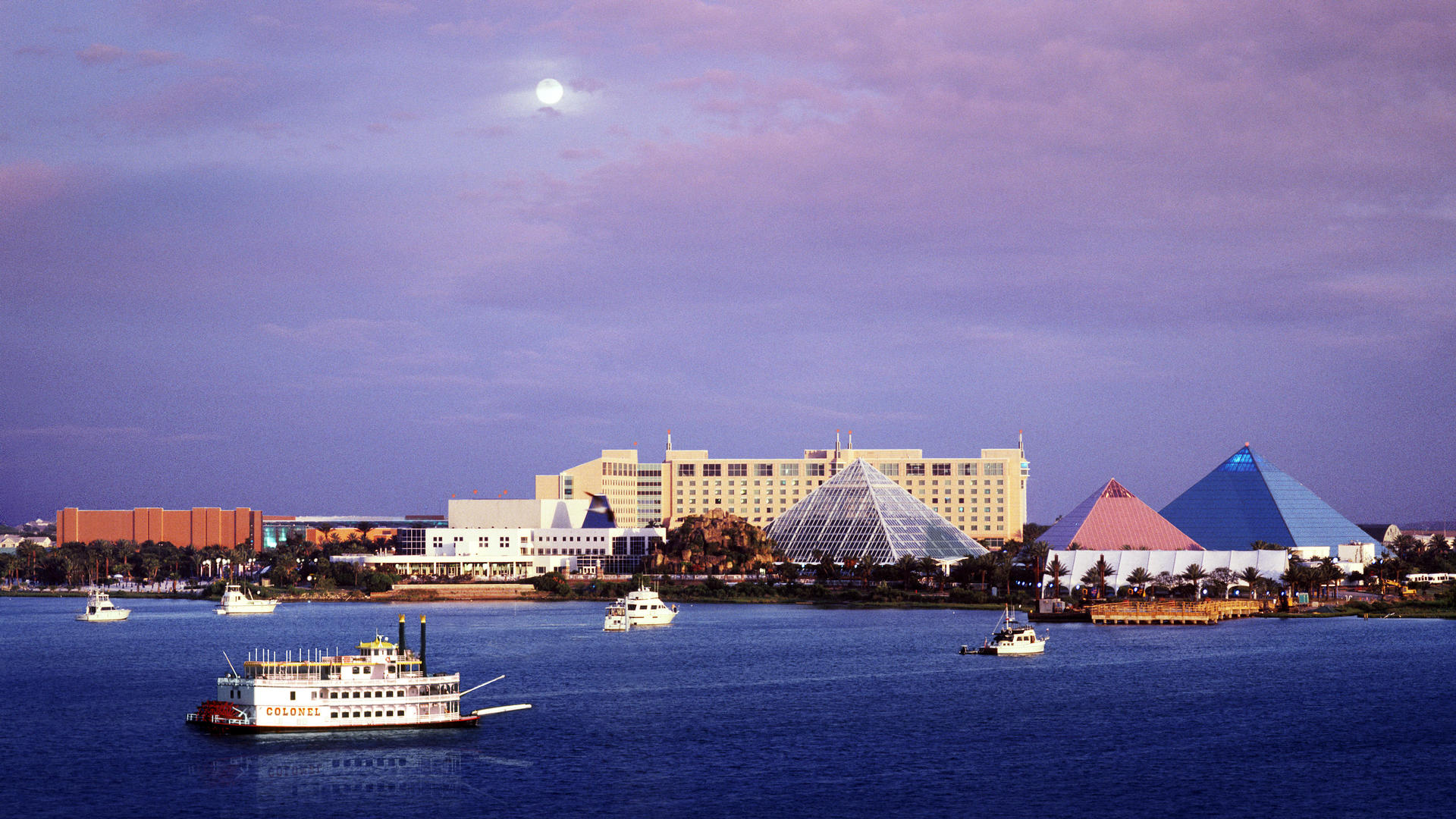 Holiday in the Gardens Hours:  CLOSED

Moody Gardens is a public, non-profit educational destination utilizing nature in the advancement of rehabilitation, conservation, recreation, and research.

Moody Gardens® began in the mid-1980s with a horse barn, a riding arena with a hippotherapy riding program for people with head injuries and an extraordinary vision to create an island tourist destination. Today Moody Gardens® is one of the premier educational/leisure facilities in the Southwest. It also provides horticultural therapy, education and employment for persons with a wide range of physical and emotional disabilities.

Since its inception in 1983 and adoption of an eight phase master plan in 1985, Moody Gardens® has illustrated through its various attractions numerous innovative and creative programs - resulting in a visitation count of approximately 2 million visitors annually. 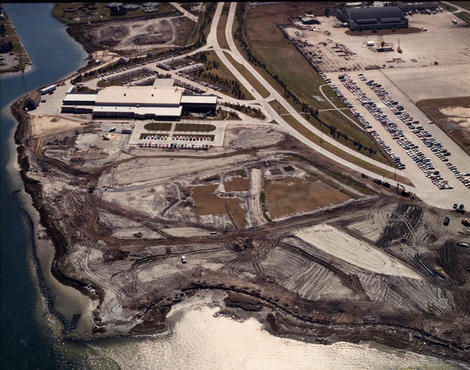 1986 – Hope Therapy: Site secured by The Moody Foundation to establish a hippotherapy program. Later expanded to include animal and horticultural therapy, education and employment for persons with physical and emotional disabilities.

1986 – Convention Center: Originally opened as Hope Arena. It later expanded from 35,000 to 60,000 square feet to accommodate trade shows, conventions and events. It is now known as the Moody Gardens® Convention Center.

1988 – Palm Beach: Tons of white Florida sand was barged in across the Gulf of Mexico to create this exotic family beach.

1988 – The Learning Place: Originally opened as Seaside Safari. Now the home of our educational programs. 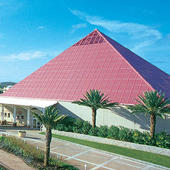 1990 – Production Area: Includes two greenhouses used to propagate most of the plants seen on our grounds and for our Medicinal Plant Program. Our Water Treatment Plant takes effluent from Galveston's water treatment facility and treats and polishes it for use on all exterior landscaping.

1993 – Rainforest Pyramid® and MG 3D Theater Complex: More than 1,700 exotic plant and animal species from the rainforests of Asia, the tropical Americas and Africa are featured in the Rainforest Pyramid®. The Visitor Center houses the Garden Restaurant and Dancing Waters light and fountain show. It opened as America's first IMAX® 3D Theater and continues to showcase films by some of the world's top filmmakers.

1999 – Aquarium Pyramid®: The 1.5 million-gallon aquatic attractions is a splashy tribute to the North Pacific, Caribbean, Tropical Pacific and South Atlantic Oceans. As one of the largest aquariums in the U.S., the facility features close-up views of penguins, sharks, seals, seahorses, thousands of tropical fish and much more.

2004 - Hotel and Convention Center Expansion: This expansion project provided an additional 125-room wing to the hotel and expanded the Exhibit Hall to 60,000 square feet. This flexible meeting space is available for events ranging from trade shows and concerts to large gala dinners. 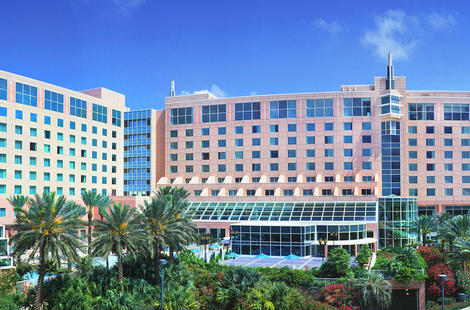 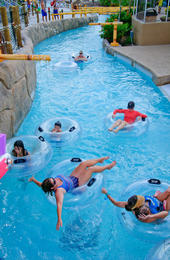 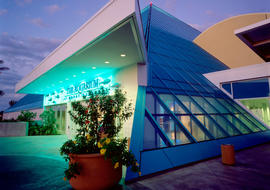 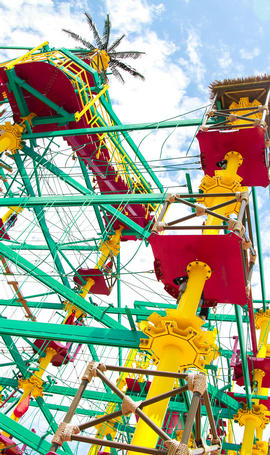 2014 – Sky Trail® Explorer Ropes Course and Moody Gardens Zip Line: The two newest permanent attractions to open at Moody Gardens are the Ropes Course and Zip Line. Ranging from Criss-Cross Tight Ropes to Burma Buckets, the 81-foot Ropes Course is filled with 48 fascinating obstacles suitable for the whole family to enjoy. Children can even take on an adventure of a smaller scale on the Sky Tykes™ Ropes Course that is appropriate for those who are 48 inches and under. The Zip Line glides over Palm Beach and the Lazy River 60 feet in the air for a bird’s eye view of the Moody Gardens Pyramids and tropical gardens.

2014 – ICE LAND: Ice Sculptures: Moody Gardens transformed into the premier holiday destination with the debut of ICE LAND: Ice Sculptures during the 2014 holiday season. Being the only holiday ice exhibition on the Gulf Coast, this vast and amazing display of magnificent ice creations adds a frosty new addition to the Festival of Lights and other holiday attractions. A skilled team of award-winning professional ice carvers from Harbin, China dive into 2 million pounds of ice and transform it into majestic and towering marvels that are chilled and held at a temperature of 9 degrees throughout the holiday season. ICE LAND has continued since 2014, taking on a new theme each year. ICE LAND: Christmas Around the World will open Nov. 16, 2019

2014 – SpongeBob SubPants Adventure in the Audience Recognition Theater: The SpongeBob SubPants Adventure is a one-of-a-kind interactive experience that allows guests to go on a submarine voyage to explore the world of Bikini Bottom with the help of their captain, Patrick Star. Visitors are able to choose their path through the wild and silly deep-sea adventure and have real-time conversations with Patrick. The attraction takes visitors from digital to real time through exciting 4D sensory elements which brings the adventure to life through scents, bubbles and bouncing beach balls. Moody Gardens partnered with Nickelodeon, Super 78 and SimEx-Iwerks Entertainment to create this innovative attraction

2017 – Aquarium Pyramid: A multi-phased renovation at the Aquarium Pyramid was completed in May 2017 ensuring Moody Gardens’ guests have a fun and awe-inspiring experience wonderfully complemented with conservation messages that underscore the vital importance of the oceans. New exhibits not only inspire visitor interest and empathy, but also connect visitors to specific ocean habitats. Visitors travel from the Gulf of Mexico to the South Atlantic, the South Atlantic, the South Pacific, the North Pacific, and the Caribbean. Each ocean exhibit highlights different marine sanctuaries and different aspects of our relationship to the seas. There are also a variety of new exhibits and surprises, including the addition of the tropical Humboldt penguins and touch tanks featuring jellies, stingrays and other crustaceans.

2019 – 20,000 Leagues Under The Sea – An Interactive Adventure in the Audience Recognition Theater: In November 2019 a new attraction replaced the SpongeBob SubPants Adventure in the Audience Recognition Theater – 20,000 Leagues Under the Sea – An Interactive Adventure. Captain Nemo and his famous Nautilus submarine are embarking on their next voyage and for this dive guests are invited to be part of the crew. Help operate the ship, choose which direction it travels, activate the on-board camera, and interact with fascinating sea creatures including a sting ray, an anglerfish, a leatherback sea turtle, a killer whale, even a colossal squid. Along with his helper robots, Echo and Torque, Deep will escort The Nautilus to a spectacular coral reef, ice caves in the Antarctic, an ancient lost city, undersea volcanoes, and more. 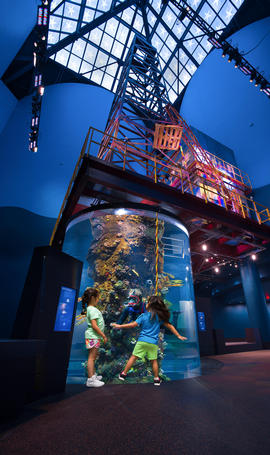 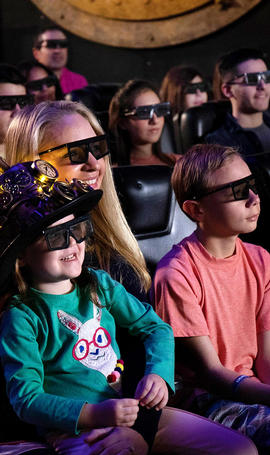